Could Transcendental Meditation help you jump-start creativity? You bet it does! Here’s what folks from all walks of life — from music to marketing — have said about the effect of TM on thinking like there is no box. “I got more and more happiness in the doing of things, ideas seemed to flow more freely.“ — David Lynch, film director

“So when you’re thinking about creativity, it comes from a source – an inner source. When you’re meditating, you’re bringing your consciousness to that centered source of creativity and intelligence. In my opinion, it’s the best way to tap into creativity.” — Tosin Abasi,guitar player/musician

“If you want to get in touch with your creative juices, they are all going to be inside anyway. Once you learn Transcendental Meditation, though, you can get right down there, and like David Lynch says, catch those big fish. That’s the idea.” — Donovan, singer

“I started to have more creative thoughts; I started to draw, which was a big things for me because I thought I could not draw, and this had blocked me from learning design earlier. But after the course, it just kept coming!” — Anita Tilly Ymani, fashion designer 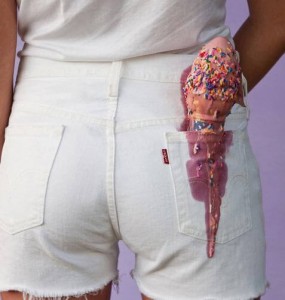 “In Alabama It Is Illegal to Have An Ice Cream Cone In Your Back Pocket at All Times” from the series “I Fought the Law” by Olivia Locher. Take a look at our virtual Museum of Meditation Art!

“To find the best ideas you have to go deep within yourself. To do this I practice Transcendental Meditation twice a day, every day, and by doing so I believe it keeps the ideas coming.” — Oliva Locher, photographer

“I’ve had an immediate decrease on the level of anxiety, my stress levels… I notice, mostly when I don’t actually do TM, that I actually see a rise in these things I feel less creative.”— Kellee Maize, rapper

“The research on the benefits of Transcendental Meditation is astonishing – and it certainly gives me more vitality, stamina and good health as well as takes me deep into a great problem-solving and creativity mode.” — Susie Pearl,PR manager

“My creativity and writing music went through the roof! I wrote a lot of new music in a very short time.” — Rick Culter,multi-instrumentalist/composer

“I think that meditation puts you in that zone, or at least presents you with an opportunity to enter it. Things just begin to flow then. And that’s what I’ve found about creativity. It doesn’t come from forcing and straining and trying really hard. I think it’s more about relaxing and letting go until it all just starts pouring out of you.” — Lee Chesnut, music producer

“A new world unfolded in front of me. I realized you can actually deliver all these marketing programs for different companies at the same time. In terms of creativity, focus and enhanced work relationships, TM was top—second to none!” — Cristina Ballestros, marketing manager “By the time I got to college, I noticed that I was becoming less free and creative than when I had been, say, at 9 or 10. I was very stressed out, unable to accomplish what I wanted to do. I was in the composition program at Michigan, yet I was having a really hard time composing… Within a short period of time, after I had started meditating, all the clouds blew away! I was able to compose, and more importantly, be happy about what I was composing.” — Donald Sosin, composer for silent films

“For people that are so creative and have this kind of creative faucet that never turns off – it just continues and continues – it can be a little exhausting. And meditation is actually the one time I get to really reset.” — Katy Perry, singer/songwriter