Josh Homme, the frontman of the rock band Queens of the Stone Age credits the Transcendental Meditation technique for helping him recover from a near-death experience. 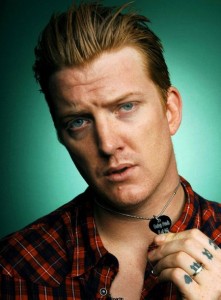 For the first time, Josh Homme has described in public how years of ‘pushing the limits’ with work overload and heavy partying had brought him to the brink of death in 2010.

He contracted methicillin-resistant staphylococcus aureus (MRSA) which his immune system couldn’t fight due to stress. Doctors eventually had to use a defibrillator to revive Josh from clinical death following an asphyxiation during surgery.

Weakened physically and scarred mentally from the experience, Josh Homme found new strength with the practice of meditation.

“I had been myself for too long,” Josh Homme said.

“The odds were dropping to zero – I was in three bands, and I loved to produce records for other bands, and I had a family I loved. I wanted to be everything for everyone. I beat myself till I got really sick.

I needed surgery because the fatigue was physically manifesting itself.

I got MRSA, and I couldn’t shake it because my immune system was so weak. People die of this disease all the time. In fact, someone down the hall died of it while I was in the hospital. So I was like, ‘Oh no… what have I done…’

And then, when I was having surgery to fix it, they lost me trying to get the oxygen tube down my throat and re-oxygenate my blood…

So I basically choke to death.

I saw no tunnel or anything. But when I woke up, I knew something was wrong. Someone had hurt me, something was stolen from me. I had lost something.

I’ve always heard music in my head since I was a little kid. When I woke up I heard nothing for a couple of years. And it affected me. My doctor told me [after the surgery]: ‘I thought we lost you there.’

So I was in bed for 4 months. It took all those rivers converging at once to stop me – and then I was stopped cold.” NO HOLDING BACK: Josh Homme performing with Queens of the Stone Age before his illness, London 2007.

Nurtured back to life with the help of meditation practice

Yet it did the greatest thing it could ever do to me: it zeroed me. I was even below zero, had to crawl back to zero! And I’m really thankful for it because I now know what is important.

The darkness lasted for a couple of years.

But one of the things which really helped me was Transcendental Meditation. There’s no dogma. There’s no one telling you anything. It’s not even about you. It’s about realizing nothingness and oneness. Letting things be. Josh Homme (b. 1973) is an American rock musician, multi-instrumentalist and record producer. His songs and albums are often included in charts ranking the best music of the 2000s.