In November 2007, Maharishi Mahesh Yogi, founder of the Transcendental Meditation technique, was featured in a biographical documentary on the International History Channel. ITN Factual, a UK-based production company, made the film.

How it was made: The story behind the film

Ken Chawkin, one of the people heavily involved in the project, recalls how it happened:

“We were always trying to get through to the Biography Channel, but they would never respond. One day, when the numbers were very high on the Invincible America Assembly—a large group of peace-creating experts in Fairfield, Iowa—a producer from London, Fiona Procter, called to say that her team had been commissioned by A&E to do a documentary on Maharishi. This was something I had wanted for so long!” 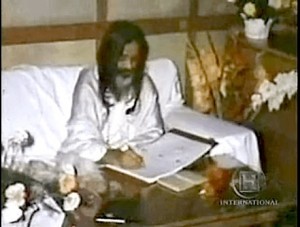 A scene from the documentary: Maharishi working on the translation and commentary of the Bhagavad Gita

After a few conference calls between Chawkin, David Lynch Foundation executive director Bob Roth, Procter, and her boss, it became clear that the project was not about slam journalism. The two producers assured Chawkin and Roth that the documentary would be a respectful treatment of Maharishi and his accomplishments.

Maharishi was informed about the project and gave them the green light to go ahead. Ken Chawkin got on board to help out and in the process uncovered some hidden treasures.

“I knew that Eileen Learoyd, the former national director of the Canadian TM organization and a professional journalist, had made personal videos of Maharishi. She had since passed away, so I contacted her daughter, Grania Litwin, also a journalist, and asked her if she could send those videos to us so we could convert them to digital format for Fiona and her documentary.

“In the box were films of Maharishi in Rishikesh, Maharishi working on the Bhagavad Gita in Canada—all these early videos, dating back to 1962! There was amazing footage of Maharishi teaching at Catalina Island in 1962 that was still in the original film canister!” 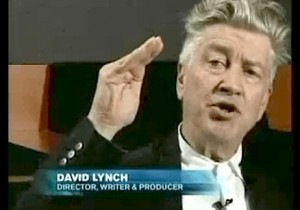 David Lynch in a scene from the film

DLF video director Adam Pressman happened to be in Fairfield at the time, and arranged to have the videotapes digitized. Together Chawkin, Pressman and Roth edited selections and sent them to the producer for use in the film. She was delighted to receive such historic footage.

In addition, Chawkin arranged interviews for Procter with well-known meditating celebrities like David Lynch, Donovan, and Mike Love, as well as leaders of the TM organization such as Bevan Morris, John Hagelin, and Bob Roth. 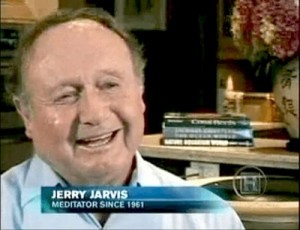 Chawkin also introduced Procter to Alan Waite, who had made the award-winning 1968 documentary film about Maharishi called Sage for a New Generation. She incorporated segments of the film and interviewed Alan when she was in Los Angeles, along with Jerry Jarvis, an earlier leader of the TM organization.

While watching the film, Procter also discovered that Maharishi had stayed with the Olson family in Los Angeles during his earlier visits to the USA. She wanted to speak with Theresa Olson, who happened to be living in Fairfield, Iowa, at the time.

Procter showed up in Fairfield and Chawkin set up interviews for her, including one with Theresa Olson. He commented on how much support the project seemed to receive:

“Whatever Procter asked for—aerial views of Maharishi Vedic City and the MUM campus, and more—somehow, amazingly, I was able to quickly arrange it for her. The entire process was effortless and very enjoyable.”

Alan Waite, director of Sage For a New Generation, footage from which was also used in the documentary

While in town, Chawkin hosted Procter along with the help of Sally (Sali) Peden, one of Maharishi’s early assistants. Both Peden and Olson had worked closely with Maharishi in the 1970s at his international headquarters in Seelisberg, Switzerland.

Procter acknowledged Peden’s and Olson’s contributions, which actually helped clarify a lot of things for her about Maharishi—especially his tireless activities to remove human suffering in the world. Although Peden’s comments didn’t make a final cut, when Procter asked her what she thought Maharishi’s legacy would be to the world, she responded: “It’s pretty easy. It’s his knowledge.”

She described how during all those years Maharishi had been developing his knowledge and had created a situation where thousands of people could now access it, “and have that same experience—something that had been just the ability of only a few people in the world to have and to know. And he’s changed that. The door is open. Anyone can get to that highest state of consciousness, and have the joy of the fullness of life.”

The result was exactly what Chawkin had dreamed of—a respectful documentary that displayed the amazing scope of Maharishi’s personality and achievements.

Chawkin said, “We thought it was going to be shown on A&E’s Biography Channel, but it aired instead on their International History Channel.”