The volume’s editors are psychologists David O’Connell and Deborah Bevvino, and contributors include experts from various fields. 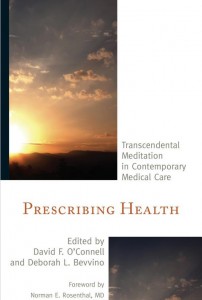 The book is divided into three sections. In the first section, authors presents the mechanisms through which TM practice can improve physical and mental health outcomes. In the second section, evidence is provided from clinical trials demonstrating that TM can alleviate different types of health problems ranging from heart disease to ADHD. The articles in the third section analyze the value of Transcendental Meditation as a healing tool not only on the level of the individual but also on the level of the society.

Link between stress and health

The first chapter of the book offers an eloquent introduction to Transcendental Meditation in the context of health care. Next,Fred Travis discusses how experience shapes the brain throughout life, which explains the healing effect of meditation for individuals of all ages. Travis describes in detail the specific psychophysiological state that allows the beneficial effect of meditation to manifest.

Deborah Bevvino elaborates on this topic in the next chapter, providing a detailed discussion of the link between stress and illness. She highlights how the stress levels of people of all ages have increased over time and how stress affects a person’s health in different negative ways. Bevvino then presents evidence on how Transcendental Meditation increases an individual’s stress resilience and discusses how this leads to concrete health benefits.

Starting off the section summarizing the clinical evidence, Vernon A. Barnes tackles the challenging task of summarizing the numerous studies that have confirmed the positive effect of Transcendental Meditation on cardiovascular health. David Lowell Smith in turn describes the evidence on how TM practice can relieve diabetes, emotional overeating, anxiety and other negative emotions. He also introduces the holistic Ayurvedic approach to preventing diabetes. Next, Sarina Grosswald, David F. O’Connell and James Krag approach the pressing topic of anxiety and anxiety disorders and offer evidence of the TM technique’s ability to alleviate this prevalent mental illness.

In the following chapter James S. Brooks discusses the studies that examine the beneficial effects of Transcendental Meditation on patients suffering from depression. David F. O’Connell and Alarik Arendander then provide an overview of evidence showing that TM practice can help conquered substance addictions among various patient populations. Wrapping up the second part of the book is William R. Stixrud and Sarina Grosswald’s discussion of how TM can help to treat childhood mental health disorders, including anxiety and mood disorders, autism spectrum disorders, ADHD, substance abuse and self-injury problems.

The final section of the book contains two chapters. In the first, Maxwell Rainforth and Robert Herron summarize the evidence of how TM practice has been proven to lower healthcare costs and to result in an overall improvement of mental and physical health.

Improving the health of the society as a whole

The book concludes with David W. Orme-Johnson and David F. O’Connell’s chapter on the revolutionary larger-scale benefits that result when TM is practiced by a significant number of individuals within a given society. These benefits include not only better health but also reductions in crime and other negative manifestations of mounting collective social distress. One of the book’s contributors Dr Fred Travis

The volume’s primary target audience is healthcare providers (physicians, nurses, psychologists, etc.) who are looking for ways to not only treat existing symptoms but also eliminate health problems at their source and/or prevent them in the first place. Yet the book can also be useful to those thinking of learning TM who wish to establish beforehand how the practice could benefit their health.

In addition to the in-depth coverage of TM’s benefits, the book also introduces more broadly the scope and potential of Ayurvedic medicine, including Vedic Psychotherapy, which in itself is profoundly enlightening for better understanding the topic of mental health and well-being for anyone, including already seasoned TM practitioners.

Get the book on Amazon