You are at:Home»Celebrities @fr»Highlights of the Change Begins Within 2015 gala
By Dan Merton on November 5, 2015 Celebrities, Education, Featured, Miscellaneous

The proceeds from the event staged at the famous Carnegie Hall in New York and hosted by George Stephanopoulos and David Lynch will go towards DLF’s Meditate New York initiative to teach the Transcendental Meditation technique for free to 10,000 at-risk New Yorkers, including veterans with PTSD, urban youth, and survivors of domestic abuse. 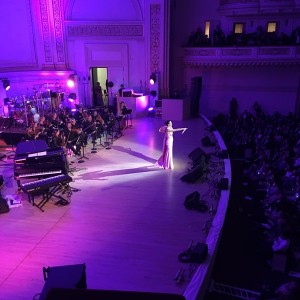 Mesmerizing performance at the Change Begins Within gala by Katy Perry

Below are some of the highlights in pictures and quotes tweeted during the event by the David Lynch Foundation.

“I started TMing about five years ago. It’s changed my life, it’s changed how I think about things.

I meditate before I write a song, before I perform. I feel my brain open up and I feel my most sharp.

It’s my favorite gift to give. It’s one of those gifts that never goes away.”

“I’m thrilled to be here tonight & to promote TM as a life tool, for helping things make sense.

You have your life and your phones battery life.”

“When I meditate, my brain lights up. So tonight I’m here to give back what meditation has given me,” said the Grammy Award winning singer-songwriter and activist from Benin.

To kick off the concert, a group meditation was led by Bob Roth during which the Carnegie Hall fell into peaceful silence. Jerry Seinfeld on the stage of Carnegie Hall Sting rehearsing for the Change Begins Within concert Sharon Isbin performing at the show