The British stand-up comedian Russell Brand is one of the most colourful celebrities practicing Transcendental Meditation. 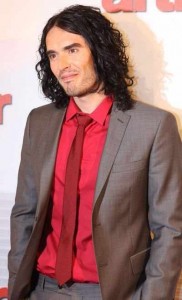 SOBER FOR THE LAST 12 YEARS: “Every year’s a landmark for me,” Brand says. “Every December 13, I remember waking up in my flat having been up all night on crack and heroin, missing my train and then fare-dodging and being picked up by the founder of drug and alcohol charity Focus 12, him giving me a cuddle and then going into treatment.”A radical turnaround

Brand has never shied away from an provocative yet honest comment about … well, anything, really.

Impulsiveness and a certain type of flamboyant self-destruction have been his trademark for years.

However, since he learned the Transcendental Meditation technique in Fairfield, Iowa in 2009, his life has gained unforeseen stability. He is clean on drugs, and happier than ever before.

Russell Brand now begins each day with what he himself calls “a shower for the brain.”

“It changes consciousness,” the comic muses about his daily session of meditation plus yoga.

“It’s really good if you’ve had addiction issues. It’s highly psychological, and very beautiful, and overwhelming, and real, and trippy!”

On the forefront of a spiritual revolution

Russell Brand is generous both in his words and his actions — he now wants others to experience the life-changing impact of meditation. INSPIRED: Russell Brand meditating with David Lynch, the movie director who is offering free TM courses to those most in need.

Each package included a meet-and-greet with Brand, a personal photograph autographed by him, a copy of David Lynch’s documentary Meditation, Creativity, Peace, and Lynch’s book,Catching the Big Fish.

Brand says, “I have become a better person through Transcendental Meditation, and I want to help bring this gift to others.” 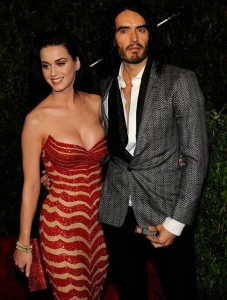 A SHARED PRACTICE: Though Russell Brand’s marriage to the pop celebrity Katy Perry ended in divorce, at least one thing still connects them. Encouraged by him, Perry also learned to meditate, and has been going strong ever since.

But he is far from being a sectarian in his approach.

TM is just something which has worked for him; other people might find other ways and means to break the vicious cycle of blind stupidity.

Behind the diversity of facades, says Brand, is hidden the same authentic message.

“The elegant simplicity of Lao-Tzu, or the charming voluptuousness of the Vedas, the passion of Catholicism, the potency of Islam — everyone is saying one and the same thing. “We are all one.”