You are at:Home»Education @fr»Ten years of teaching TM in Nashik, India
By Dan Merton on October 1, 2015 Education, Featured, Miscellaneous

What could two teachers of Transcendental Meditation accomplish in a decade? Turns out – quite a lot!

The TM center established by Dr. Yogesh Jagzap and Sandeep Jaltare is located in the city of Nashik, in the district of Maharashtra in India.

“Here we started teaching TM in the year 2005 and have taught TM to many people of all ages, castes, and creeds,” Dr. Jagzap explains.

In addition to their regular program of teaching TM and providing support for those who are already meditating, the two teachers have reached out help the local community.

Work-related stress causes many problems, both in and out of the office. At home, it negatively affects family relations and health; at work, it lowers productivity levels and job satisfaction.

The outcome? Employees who were taught TM in these companies report increased energy levels, work efficiency and job satisfaction. They also notice that the quality of their sleep and relationships has improved; they feel more inner harmony, tolerance and acceptance; and they enjoy better health.

One of the most gratifying experiences for the TM teachers of Nashik has been instructing almost a hundred students in the tribal area of Tryambakeshwar.

The students have shown a lot of enthusiasm and have enjoyed many benefits from practicing TM: increased concentration, alertness, confidence, self-discipline, interest, and ability to learn; better health; and improved relationships, behavior, and quality of sleep. 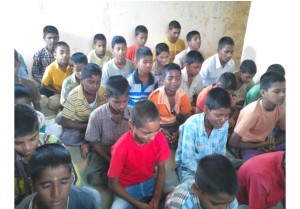 Dr. Jagzap and Mr. Jaltare also introduced the TM program to local private coaching classes. In the past five years, around 350 of these students have been instructed. In addition to the aforementioned benefits, these students and their parents have also noticed that TM has helped to overcome dependency on TV and mobile phones. In the modern age, where excessive screen time prevents children from thriving both socially and academically, this “side effect” is of great importance.

To benefit those less fortunate, Dr. Jagzap and Mr. Jaltare have also instructed children in a local orphanage – a target group that will benefit greatly from the added resilience to stress which TM helps to build.

Not just the students

At schools it is not only the students, however, who are in desperate need of efficient stress relief. With ever increasing demands and responsibilities, teachers also often suffer from burnout. At D.D. Bytco High School and Junior College in Nashik, around 170 teachers have already been instructed in TM, and the overwhelmingly positive response has created a demand for the continuation of the program. In the acting school Akhil Bhartiya Natya Parishad, parents were also taught TM along with their children who study at the institution. 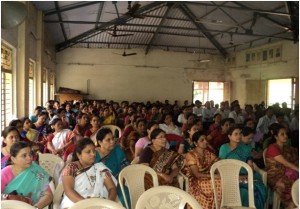 School teachers on a lecture on TM

Since diving within, relaxing, and releasing stress are beneficial in all stages of life, Dr. Jagzap and Mr. Jaltare also started a program at a retirement home, teaching TM to senior citizens. Since TM benefits health and is linked to increased longevity, the outcomes of TM practice at a retirement home are bound to be positive.

Studies conducted in the United States have repeatedly confirmed that Transcendental Meditation practice is a great tool for criminal rehabilitation. According to the Journal of Offender Rehabilitation, TM helps to reduce prisoner recidivism by a whopping 50%. Dr. Jagzap and Mr. Jaltare have put this proven theory into practice in their local area.

The two teachers have taught TM to 90 inmates of the Nasik Central Jail and 40 youngsters in the juvenile prison of Remand Home. The deep rest and stress relief that the TM technique provides for the body and mind have proven as transformative in India as in the United States. Prisoners who have learned TM report that they enjoy the emotional freedom, greater acceptance, increase in energy, more positive outlook, better sleep and improved relationships that have resulted from the practice.

Erasing the stress that might otherwise spur antisocial behavior, the practice of TM has been a vital part of a path towards a new and better life for those behind bars in Nasik. The positive feedback has inspired a plan to instruct more prisoners. Most recently, the local TM center has teamed up with the local police department in an effort to rehabilitate chronic, habitual criminals.

On top of all of this, Dr. Jagzap and Mr. Jaltare have found time and energy to be the change they wish to see in the world in other ways as well.

Together with enthusiastic meditators of the region, they organized a health checkup camp at Vilholi village. The camp benefited more than 500 people by providing dental checkups/treatment and gynecological checkups. Plans to repeat this helpful and necessary endeavor are already being made. Children at the health camp

..keeps the doctor away.

One of the projects especially close to the heart of Dr. Yogesh Jagzap has been introducing TM to medical doctors who graduated the same year he did from Vasantrao Pawar Medical College in Nashik. Impressed with the scientific evidence on the health benefits of the TM practice, the doctors who attended his lectures have started to recommend the practice to their patients. To spread the word on TM, Dr. Jagzap and Mr. Jaltare also keep introducing TM in Education and Health exhibitions.

Yet for them, all this work is not a stressful burden.

“It is such a great joy for us to teach TM. We feel fortunate and blessed being TM teachers,” Dr. Jagzap and Mr. Jaltare say.